Can Finland become a role model of decarbonization?

On Thursday, March 10th, 2022, the Alliance hosted a morning webinar addressing the question of Finland’s possible role model in decarbonization. The Chairman of the Alliance Pasi Mikkonen of Fortum welcomed an international audience of over 40 viewers to the webinar and introduced the panelists. The three panelists framed the question posed by the webinar from varying viewpoints. 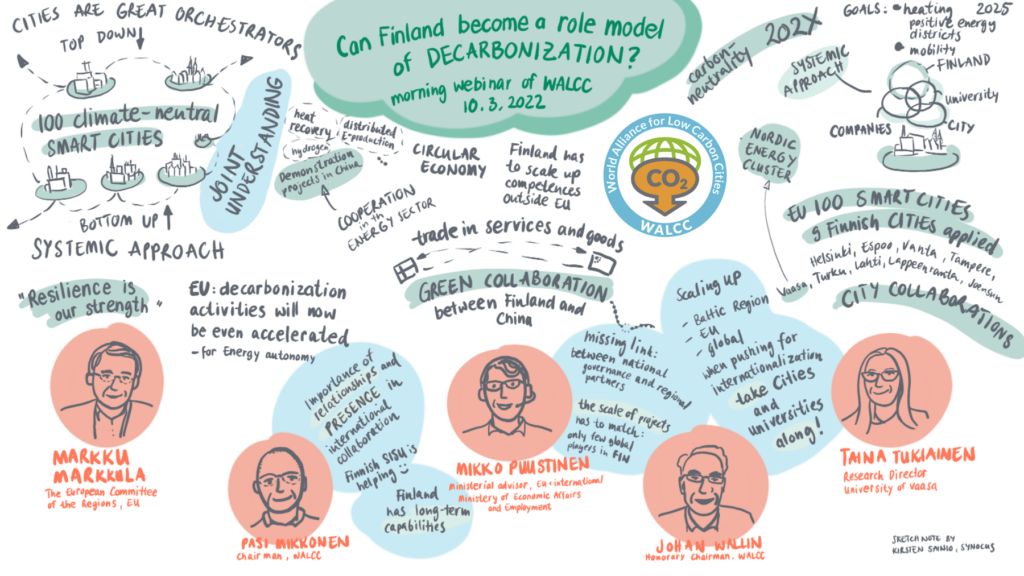 Markku Markkula, Vice-President of the European Committee of the Regions, began by relating his experiences from the meeting of the European regions in Marseille the previous week. Europe is no longer the same as it was a few weeks ago. Russia’s invasion of Ukraine and the resulting conflict have brought the countries and regions of the European Union closer together. Besides the tragic circumstances of the war, there was a consensus for an acceleration of all decarbonization efforts since they will help European countries to gain energy autonomy from Russian fossil energy.

Markkula continued, the EU 100 Climate Neutral and Smart Cities mission that called for European cities to express their interest in becoming forerunners and model cities by reaching climate neutrality by 2030. 377 cities submitted Expressions of Interest (EoI) in the mission, with nine coming from Finland. This program is a new and vital instrument based on bottom-up measures from the cities and regions while integrating those with an effective top-down frame offered by the EU. Cities are excellent orchestrators. Markkula used the City of Espoo as an example of the multi-level approach necessary. Espoo is building partnerships and commitments using city contracts, co-creating smart city innovations together with companies and citizens, and building a roadmap to climate neutrality by 2030.

Mikko Puustinen, Ministerial Adviser at the Ministry for Economic Affairs and Employment, shared his experiences of Finland’s collaboration on a global stage for climate neutrality, namely the green collaboration between Finland and China. The more traditional trade in services and goods aside, there has been bilateral cooperation in the field of energy between the two countries. Planned future projects will focus on renewable and low-emission energy production and new innovations in the energy sector.

At a company level, the cooperation is coordinated by Business Finland and the Chinese energy institute EPPEI. There are currently five demonstration projects in different parts of China addressing heat recovery and wastewater heat recovery, low-carbon energy production related to the production, storage, and the use of electricity and hydrogen, distributed energy production, and energy production from agricultural biomass. Of particular interest is the new potential in the field of circular economy for Finish businesses. This potential can only be fully realized by scaling up the business globally, including in major markets such as China.

While there are many differences in values between China and Finland, “green collaborations” are one of the important sectors in which our interests align with China.

Taina Tukiainen’s perspective on Finnish decarbonization came from city-company collaborations. Tukiainen is a Research Director at the University of Vaasa and studies the partnerships of private and public actors in urban municipalities. She noted that the City of Vaasa was among the nine Finnish cities that submitted an EoI for the 100 Climate Neutral and Smart Cities mission. Vaasa has established itself as a Nordic Energy Cluster with about 160 companies that have a long tradition of working collaboratively. The cluster accounts for 25% of Finland’s total exports in energy technology and 90% of the Finnish R&D investments in electrical and automation solutions.

A natural starting point for the city of Vaasa, therefore, is in aiming at carbon neutrality from the perspective of energy systems. The city is collaborating with companies and the University of Vaasa on a systemic approach to reach carbon neutrality in the 2020s. Positive energy districts and innovation ecosystems are keys to reaching carbon neutral heating by 2025 implementing waste heat recovery and innovative heat storage into the district heating network of the municipality.

Johan Wallin rounded up the webinar by moderating a discussion with the panelists and asking some of the questions posed by the audience. The importance of scaling up Finland’s existing capabilities from the Baltic region to Europe and to countries outside Europe like e.g. China by building green collaborations was recognized by all speakers. Some of the challenges mentioned were the importance of relationships and presence in the country and building trust through long-term perspectives. Speakers emphasized the value of a clearly defined portfolio approach in expanding Finland’s impact globally. This approach becomes all the more important in working with local procedures, bureaucracy, and a scale of demand of a partner country that may not match the capabilities of one Finnish company alone.

This was the first in a series of morning webinars designed to support the collaboration between the World Alliance of Low Carbon Cities members and encourage dialogue on interesting topics. While the time for further discussion was cut short, we had a very inspiring morning and look forward to the next webinar in April as well as the upcoming

There we will continue our dialogue on Driving Decarbonization in person.

Stay tuned for more information on that.